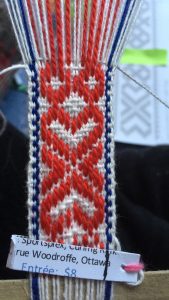 I’ve recently become fascinated with weaving narrow bands using a special band heddle. This technique uses supplementary warp threads to form the pattern by floating on top of or underneath a base layer of weaving. The pattern threads are picked up or dropped depending on the pattern. Weavers in Scandinavia and the Baltic countries traditionally made beautiful bands this way.

You can also weave these patterns using a regular rigid heddle or an inkle loom but it is more time consuming.

I weave backstrap style which is cheap, easy and portable. No loom is needed. One end of the warp is tied to my waist and the other end tied to something solid like a door handle, chair or tree.

I made myself heddles of two different styles to play with. One has an extra row of holes on top compared to a regular rigid heddle and the other has extra shorter slots. I also made some Sami style heddles which make picking up pattern threads very easy with its pointed tip. I designed the heddles and shuttles using Adobe Illustrator and cut them out of maple using one of our public library’s laser cutters. This is much quicker and more accurate than cutting all those slots and holes by hand. Then I spent a long time sanding them back at home.

Laser cutting a bandweaving heddle from Judy Kavanagh on Vimeo.

I will be selling both types of heddles in my Etsy shop soon if you would like to try this kind of weaving. Yes, that’s my cat Elfy on the heddle.

I designed some of my own patterns and charted them in a spreadsheet pattern by setting columns and rows to the same measurement to make squares and filling in the pattern squares with a background colour. 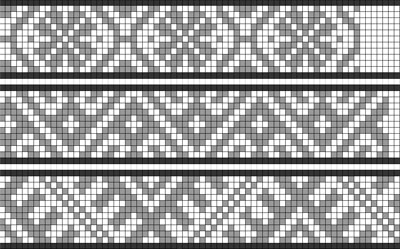 Bandweaving with a double holed heddle from Judy Kavanagh on Vimeo.

Note that the heddle is not used to beat the pattern, just to form the sheds. You beat with the shuttle that has a beveled lower edge.

The disadvantage of this type of heddle is that it’s wider than the one with double holes.

For this band I used a lovely pattern from Heather Torgenrud’s excellent book Norwegian Pick-up Bandweaving.

Here’s a video of me weaving with a double slot heddle.

Bandweaving from Judy Kavanagh on Vimeo.

Videos of the double holed heddle

Videos of the double slot heddle